It’s that time of year again–another Sporadic E season has concluded, and it–like previous years–leaves us with more to be desired.  2015 was surely a dud.

Sporadic E-Skip is a phenomenon which allows broadcast signals from up to 1500 miles away, on average, to be received in one location during the warmer months.  And in normal years, we usually have Es openings throughout May to the end of July.

But it seemed like this season never really picked up.  The season had absolutely zero openings in July–an otherwise fertile FM Es month–and only one opening where the MUF reached 107.9 FM.  All but one of the 23 new FM logs this year were received within the last effective week of openings, and the cumulative duration of all openings this year is about half of what I received in 2014.

So how could anything turn out good from a year with continued downturns in all reviewed areas?  HD Radio and RDS decodes were plentiful this year.  I also observed my first FM Es opening while on vacation this year.  On 6/20/15, while driving in the West Palm Beach, FL area on vacation, I observed an intense FM Es opening into multiple states, including my home state of Virginia, with full RDS decodes.  Since that opening occurred outside of my home region, it has no bearing on my overall review of the season, nor is it included in any of the charts and graphs below.

The charts below show the calendar ‘spread’ of every Es season since 2007.  The chart is divided in three sections, one for each month.  Every dot represents one day that an FM Es opening was observed.  For example, if FM Es was observed on June 5, a dot will be seen in the ‘early’ section of the month, close to May’s section while an opening on June 20 will be on the grid closer to July’s section.

Let’s face it: openings were few and far in-between in 2015.  It almost mirrors the 2010 season (without openings in one of the three potential Es months, and a few in the other.  It also is similar to the 2009 season with lack of openings in July. 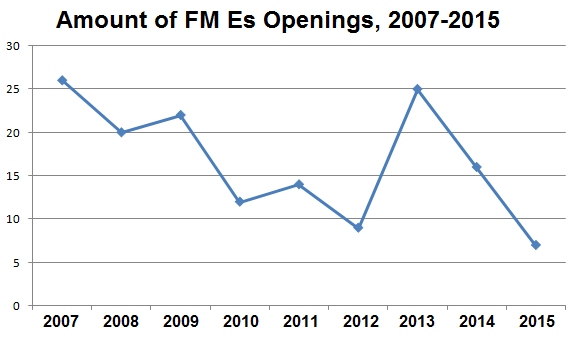 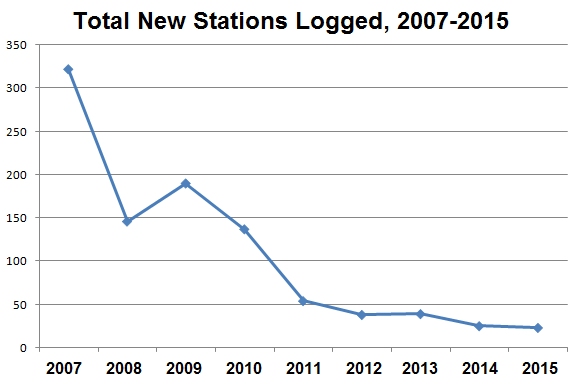 Surprisingly, even with a record low amount of FM Es openings itself and duration of openings since I started to keep records in 2007, 2015 was remarkably average and okay in the area of new logs.  This is especially important to note since there is usually, more-or-less, a finite amount of FM stations that can be logged at any given time.  Each year, you get closer to that amount of possible new FM logs.  In other words, 23 new logs in a year with otherwise dismal results is a good thing.

Above we have the 2015 new log totals broken down by opening. Strangely, almost all of the new logs this year were from the last week of the observed season.  In previous years, it seemed new logs were more evenly dispersed among the observed openings.

Ironically, this year (with a record low amount of openings), I’ve seen more than five new logs three openings in a row–something not seen in previous years since I started to keep statistics on Es seasons.

As usual, openings into the deep south reigned king in 2015.  No openings were received into the Canadian Maritimes this year, and the midwest was largely ignored in lieu of its upper and lower extremities.  Instead of having the common midwest openings, some rare states, such as MS, AL and GA, were received instead.

Totals in the chart below only reflects Es either observed while at my radios, or heard on unattended recordings (which I run on two frequencies 24/7). Times from multiple openings spanning different times of the day are combined for a grand total in this category. This is because I’m not sure if what appeared to be two openings in one day was, in fact, the same opening which dipped below 88.1 FM for a short period.

This category is honestly depressing for me to see as a DXer.  The duration of FM Es observed in 2015 was almost half of what I received last year, more than three times less than what was received in 2013.  Given I missed the 5/14 and 6/3 openings, there is a large chance that much more Es was observed on lower frequencies.  Therefore, this category may not be truly representative of the season.

A MUF, or maximum usable frequency, is the highest frequency that Sporadic E is observed on during an Es opening.  Every opening has a different MUF, and the MUF itself often changes during the same opening.  The higher the MUF, the better.  For reporting purposes, the highest MUF observed in each opening is what is listed above.

Looking ahead, I believe that the 2016 Sporadic E season will bring in 20 new FM logs from 15 openings.  I’ll even go a step further and predict that the new logs will be spread out among many openings, not all from one or two openings, like seen this year.